Hello again from the Tenant. I tried the Bistro’s “3 for 30” Vegan Prix Fixe Dinner last Wednesday and if you did, too, you know what I’m about to say. If not, definitely read on!

As I’ve mentioned before, I’m not vegan, but I have found that when I eat Bistro 185’s vegan concoctions, I enjoy them so much that I truly do not miss the meat. And if you’re a dedicated vegan, you can’t help but appreciate not only the care Chefs Jakub and Ruth take toward ensuring the 100% vegan content of every dish, but the gourmet flair they bring to each one. This dinner was certainly no exception!

The starter course was Butternut Squash Soup with Roasted Garlic and Caramelized Vidalia Onions. I don’t think I have words to describe how delicious and satisfying it was. All I know is, I feel as if I could have eaten several more bowlsful. The flavor was so rich—a combination of sweetness and fiery spice—and the texture thick and substantial. It arrived streaked with a garnish of almond milk and sprigged with thyme, and it was an amazing winter soup that drained any feeling of chill from the cold weather outside right out of my body.

Next in line was the entree, Eggplant Parmigiana with Whole Wheat Spaghetti and Vegan Mozzarella Cheese and Slow-Cooked Marinara. This dish was also a winner—its sauce full of fresh tomatoes and the eggplant slices tender, light, and un-greasy, ever so gently breaded and fried, laid atop fantastic whole-wheat pasta. Even the pully texture of the vegan mozzarella was perfect, just as natural as the real thing. I’m told vegan cheese is made from almond milk. Don’t ask me how—all I know is, this was great. It was accompanied by a savory piece of garlic toast for soaking up extra sauce. 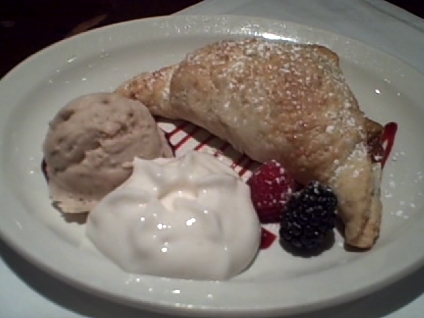 The finishing touch was as tasty a dessert as I’ve ever had, the Vegan Apple Pie—or, to be more precise, a Vegan Apple Turnover. It arrived hot and flaky, full of juicy, saucy apple slices in delightfully light pastry, accompanied by a little scoop of cinnamon almond-milk ice cream, a dollop of almond-milk “whipped cream,” and a fresh raspberry and blackberry garnish, dusted all over with powdered sugar. The “ice cream” was a terrific variation on the regular-milk variety and the “whipped cream” just as yummy. The perfect conclusion to an excellent meal!

To summarize: if you eat vegan, you owe it to yourself to try eating vegan-style at Bistro 185 whenever you have the opportunity (info about next month’s offerings will go up when ready). And even if you don’t normally eat vegan, trying a vegan dish, or even a full meal, at the Bistro is a terrific introduction, because you’ll be both surprised and impressed by the high quality of everything you taste. The flavor and texture will be so much the same as what you’d find in a traditional meal that you may even mistake what you’re eating for a non-vegan dish! Keep your eyes on the blog for information about upcoming vegan features. You’ll be impressed—and very well fed!

The menu for our three-course prix fixe Vegan Dinner Wednesday, December 15, is ready!

Remember, this dinner is $30 plus tax and gratuity, by prepaid reservation only (open seating). Make your reservation today at 216.481.9635 so you don’t miss out!

Our next Vegan Night featuring the mastery of Chef Jakub Mejstrik is coming up soon! You’ll be able to enjoy a delicious meal from beginning to end, all vegan and all fabulous:

We’re closing out the month of June in style here at the Bistro with another wonderful Vegan Dinner Series appetizer and entree from Chef Jakub Mejstrik. This Wednesday, June 30, our vegan entree is Whole Wheat Organic Moroccan Couscous with Vegetables. The vegan appetizer is Wild Mushroom Phyllo and Roasted Vegetable Pizzettes. Don’t miss this great opportunity to enjoy vegan cuisine at Bistro 185!

Error: Twitter did not respond. Please wait a few minutes and refresh this page.